We catch up with Maia Dunphy of brand new RTE series ‘What Women Want‘.  If you haven’t already watched What Women Want, the series looks at issues facing 21st century women.  The first 3 episodes have already aired which covered Beauty & Ageing, Sex and Anxiety.  Maia has written and produced for many comedy shows for RTÉ also including Podge & Rodge and Katherine Lynch’s Wagons Den.  She has worked with Dustin the Turkey and Zig & Zag and is is a regular contributor to the RTÉ 2FM Ryan Tubridy Show.  Earlier this year, Maia also competed in Celebrity MasterChef Ireland where she was a finalist.

You’re an accomplished producer, writer and broadcaster.  Do you prefer being in front or behind the camera?  It’s difficult to say. I love working behind the scenes and I’m still not 100% comfortable in front of the camera, but I feel very privileged to have been afforded the opportunity to do both.

Where and how did you get your first break in media?  I work with Double Z Enterprises who are the guys behind Podge & Rodge and Zig & Zag amongst a tonne of other things.  I was obsessed with Zig & Zag as a teen, so to end up working with the lads was incredible.  I started out as a production coordinator on A Scare at Bedtime way back in 2001. We all had a riot on that show – I met some very good friends for life on that show. Edel, Amanda and Lucy (Kennedy) and it was like one long summer holiday.  Over the years, I moved into a more creative role and I feel very fortunate to have amassed the experience I have.

You’ve written and produced comedy shows, do you find comedy comes easy?  Having worked with the lads in Double Z for over 10 years, I learned from the best!  They are talented boys.  I do find it much easier to write for other people though.

We saw you recently on Master Chef, how was that experience for you under pressure in front of the camera?  I took part in Masterchef for two reasons.  Firstly, to try and raise my profile in advance of the documentary series, and secondly because I am obsessed with the show!  To have stood in front of that iconic silver logo was surreal.  I did find it hard going, but it was a brilliant experience.

You obviously have a flare for cooking, is this how you wind down after a busy week?  I love cooking, but I’m not as good as I appeared on Masterchef!  I took chances and pulled most of them off by the skin of my teeth!  Day to day at home, I eat much more simply and never make desserts. Worst thing is, my friends now think I was hiding this secret skill every time I served them a pot of curry and rice.  I won’t get away with that any more.

Who would be your ideal dinner guests be and why?  Zig & Zag, Kermit and Fozzie Bear.  We’d just talk about humans behind their backs and only eat ice cream.  Puppets don’t do savoury.

You kicked off your first show of What Women Want looking at beauty and ageing, it was certainly an eye opener. What stood out for you?  I started out ready to condemn the entire industry and how it targets women and chips away at their sense of self.  But I did learn to be less judgmental.  I think it’s desperately sad that women feel pressure to look a certain way, or to erase the expression from their faces, but at the end of the day, if someone genuinely feels their life would improve if they had less crows’ feet, who am I to say it’s wrong?  I still feel it’s depressing that we ever came to a place where that was a choice, and wish we saw more older women in fashion, art and the media.  It’s changed a little, but not enough.

What can women expect from the new series, What Women Want?  The series looks at issues facing 21st century women. Similar in tone to my last two shows, From Boom to Maternity and Merlot & Me, they are casual conversations about occasionally serious subjects.  The sort of things women chat about over coffee (or wine!).  The last one next week will cover modern families.

I see from twitter you’re a huge fan of Breaking Bad, what do you believe is the ingredient that has you hooked?  No pun intended!   It’s a master class in drama. The best thing I’ve seen since the Sopranos.  It’s impossible to pick just one ingredient when the entire recipe is brilliant!  It’s the writing, the characters, the moral dilemma, the addictive darkness of it; all flawlessly executed with some of the best acting on telly.

What are you reading at the moment?  The Gamal by Ciaran Collins, but I put it down temporarily to read my husband’s autobiography Becoming Johnny Vegas!  So proud of him! (Johnny, not Ciaran.  Although he’s done well too…)

Catch the last in this series of “What Women Want” on Thursday night 10th October at 9.55pm on RTE2. 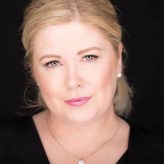