Today I am coming to you with a book review of All The Light We Cannot See by Anthony Doerr, a Pulitzer Prize winner in 2015. This historical fiction set in France during World War II tells the tale of a blind, French teenage girl and a intelligent young boy from Germany, who’s path will eventually meet. 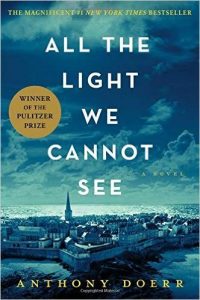 At the start of the book you meet Marie-Laure, the blind daughter of a master locksmith whom works for The National History Museum in Paris. Marie-Laure’s father is a compassionate man who helps guide his blind daughter through her disability by teaching her braille and creating wooden scale models of the streets of Paris so she can learn to navigate them. During this time, the war is about to hit Paris and Marie-Laure’s father is entrusted with a large blue diamond, a one of a kind and very valuable, by The National History Museum. Together, daughter and father, flee to a small town called Saint-Malo.

While all this is happening in France, we meet a young boy Werner, a highly intelligent orphan living in a small coal mining town of Zollverin, Germany. Werner learns how to fix radios and shares his love of radios with his sister, as they listen to an old man broadcasting tales of science and experiments. Werner is discovered by a Nazi general who encourages him to enlist and develop his skills. This is seen as a positive step for Werner, whom the only other source of work would be down in the mines, where his father was killed.

This book tells the story of how two people from very different backgrounds and how their path eventually intertwines. It documents Werner’s path through the Nazi Hilter Youth camp and the harsh realities of the war. Meanwhile, Marie-Laure, is on the opposite side of the war, fleeing from the Germans and living through the occupation of France. It tells stories of trains full of bodies, youths being trained to kill the ‘Russki’ and Nazi death camps. Meanwhile it has a slightly lighter story of tales of a diamond so rare and beautiful it is cursed to all whom carry it. 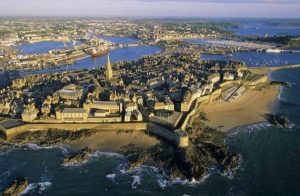 All The Light We Cannot See does a fantastic job of showing that both sides during the war suffered terribly. It shows how young German boys were forced to kill, on threat of their own safety and how indoctrination occurred in the Nazi Youth camps. It also showed that regardless of socioeconomic status, be it a well to do French girl or a poor orphaned German boy, everyone suffered during the war. The descriptions Anthony Doerr uses are so vivid one could imagine a character from the book in great detail. It is this vivid and evocative writing style that causes you to think more deeply and feel like you are part of the story or a character on the sidelines witnessing the events.

I believe the book does a great job showing how unlikely friendships were formed during the war on both sides and of the strength and determination it took to survive such a horrific experience. There are characters of all kinds, both good and bad, that you can be sympathetic towards and dislike, all at the same time. So with all the this, you are pulled into the book and taken through exciting and upsetting times to such a point, it is hard to put the book down.

If you have read All The Light We Cannot See, let me know so we can discuss it or feel free to comment below with your thoughts. 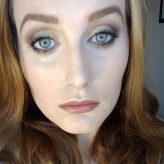